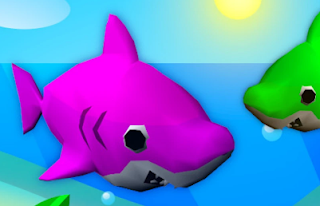 HappySharks.io is an online multiplayer game. Sharks chase each other in a massive underwater arena in this film. Smaller sharks should be pursued, whereas larger sharks should be avoided. Consume gems to rise, and use boost to launch an attack or escape.

Control:
—Move mouse to direct
—Keep mouse button down to raise
—The space bar can also be used to accelerate.
How to play:
Don't let larger sharks devour you! Boost may be used to hunt smaller sharks or to hide from charging sharks. Boosting will cause you to sacrifice jewels that you have eaten which will cause the shark to diminish in size. It is best to use the boost only when absolutely necessary. You will collide with sharks of the same size as you without missing any jewels. This can be used to smash smaller sharks into larger sharks. Avoid touching the map's side, as this would turn the shark into ashes. If you manage to drive that shark through the precarious map tip, you can use it to your benefit.
If you come too close to sharks, a red triangle will surface above them as a sign that they are large enough to kill you. To be a challenge, they must have 50% more points than you.
Small sharks who wish to evolve should swim next to larger sharks and be willing to be eaten if one of them is eaten. You have the choice of eating any of the gems from the eaten shark in order to rise faster.
Sound and music can be toggled on or off separately in the main menu or ingame by pressing the gear in the top left corner to open the ingame menu.
Gameplay:
You begin with 0 points as a small shark. You will now be consumed by someone with 1 or more points. With 0 points, you can improve without incurring any penalties. Sharks earn points and grow in size by swallowing gems scattered around the map at random. If a shark is consumed, it will lose all of the coins it has accumulated in a circle about the spot where it was eaten. The size of the circle is determined by the size of the shark; a large shark that is consumed provides an excellent chance for nearby sharks to expand rapidly. However, be cautious because it may get packed with hungry sharks.
On the diagram, there are two kinds of gems: circular gems worth 3 points and fish-shaped gems worth 10 points. The fish-shaped gems appear on the map just after a shark is consumed. The highest number of fish shaped jewels that can be dropped from an eaten shark is 500.
Customization
In the customize menu, you can personalize your shark. Choose your favorite color and pair it with some of the caps. The hat's accent color can also be personalized to make your shark really one-of-a-kind. The hats allow you to conquer the sea as a variety of sharks, such as a Spartan, Pirate, Sovereign, Gamer, or even a Viking!
Related Games