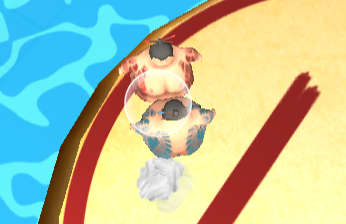 How about a funny Huge Sumos game sumo wrestler? With incredible 3D graphics and standard Somo wrestle sound effects, you can play single or two-player modes in this game. If you push buttons when your wrestler moves in this direction, your wrestler will move in that direction when you twice press them.

The food dropping on the ring is the most important aspect of the Huge Sumos game! You would become a giant wrestler if you could take the food. As you mature, you will become stronger and gain various benefits. Try to maneuver the opponent by making smart movements out of the ring. The first wrestler 3 times will win the game to drive his opposite from the ring.

Please check out the "Teach Me" and "Training" segments if you have any problems with game logic. So before you play the game, you will have the opportunity to train.