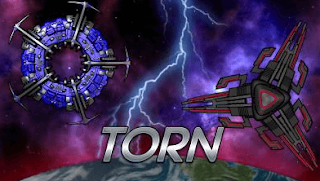 Torn is an io game that pits humans against aliens in a team-based war. Human and alien forces are battling for domination of the galaxy! A squad would you be a part of?

Control:
—WASD to move
—Left click or space bar to fire
—Q to access the base shop
Features:
—Two sides to choose from
—Upgradable spacecraft
—Monetary scheme
How to play: To steer your spacecraft, use the WASD or arrow keys. To win experience and level up, use the space bar to fire at asteroids and enemy players. Follow the brown arrows and fire the asteroids to mine ore to earn money and buy weapons. And, after the blue arrow, you'll arrive at a space station where you can sell your ore in the store. Upgrade your spacecraft and purchase new weapons to compete with other players for domination of the galaxy! Best wishes!
Torn is a fantastic game of space exploration and conquest in which you must steer your spacecraft, travel across the world, and try to attack other spaceships and asteroids in order to collect ore. Sell the ore you harvest for a profit and use the proceeds to upgrade your ship. Move around the map looking for asteroids; after you've killed one, return to the base to buy new things from the store.
You will raise the ship's rank and boost individual components such as thrust, hull armor, and radar. Don't forget to complete the available quests and hunt your enemies! This game is a lot of fun, and the RTS feature and upgrade tree make it a lot of fun to play. Will you conquer war-torn space, and will you fight for humanity or the alien invaders?
Related Games