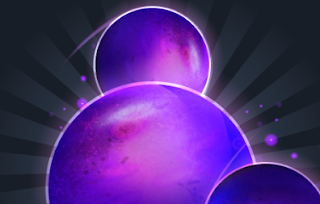 ORBz.io is a game in which your player has three orbs that rotate in a fixed orbit. Any of these orbs does damage to opponents as they come into contact with it. At the same time, if other players' orbs hit you, you will take damage.

You begin with a total of 100 health points. When you walk along, you will come across statistics that, when picked up, will grant you one health point. You'll need to catch a lot of these before your orbs are strong enough to destroy other players.
Your character and orbs can grow in size as you play, based on your fitness. Other opponents will strike you harder if you're larger, but your orbs get bigger as well, inflicting more damage per second during contacts. You may also change the orbit distance of the orbs (the distance between your character and the orbs), making it the farthest or nearest if necessary. This has a side effect in that extending the orbit slows you down but gives you a chance to capture players further away, while contracting the orbit makes you quicker and allows you to run from larger players.
The three orbs spin at a steady pace, slowing as you get larger.
Level, coins, and skins are all available.
When you die at the end of a match, you will be rewarded with XP and coins that you will use to purchase skins in the store.
There are two kinds of skins: standard skins, which can only be unlocked by leveling up, and rare skins, which can only be unlocked by leveling up. And premium skins, which you can purchase with the coins you won while playing the game (these can also have a level requirement).
You can also use the color scale in the shop to change the color of each of the orbs.
Leaderboards and Scoring
The "Arena Leaderboard" can be seen in the game; this leaderboard contains all of the players that are on the same map as you while playing; the number that appears on the right is the health of each player.
Outside of the game, the worldwide list of all players can be found at https://www.pokagames.com/p/orbz-io-leaderboard.html. This leaderboard displays the game's top teams. In-game leaderboards allow you to choose from many categories, including ranking score, most kills, most injury, and most time. You will earn ranking score points by playing, and the more you fight with other teams, the more you can earn.
The leaderboards are often divided into time periods, so you can see the top players in the last month, week, or day, as well as the all-time leaders.
Related Games