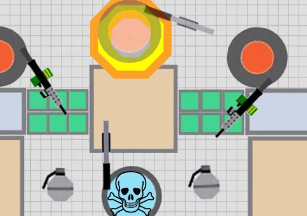 Gats.io is an arena-based tactical shooter. Choose your sword, shield, and skin tone. Attacking and defeating other players earns you credits, which you can then use to unlock rewards and special abilities. Gats.io has 21,600 different class + perk loadouts to accommodate any play style. Stats for each player are kept and can be seen at stats Gats.io.

Control:
Choose your sword, colour, and armor from the selection panel, then press the PLAY button.
- Use the WASD or arrow keys to move .
- Shoot with the left mouse button.
- Click the R key to reload.
- To use specialized powerups, click the Spacebar.
Perks can be unlocked as you earn points by doing damage to other players. By pressing the yellow update icon on the HUD, you can browse and pick perks. There are three tiers of benefits in general. The first tier is unlocked at 100 points, the second at 300 points, and the third at 600 points.
Strategy:
You will use the map's items as shield from enemy fire. Pay attention to your opponents; if they've run out of ammunition, they'll have to refill, something you will use to your benefit.
In the middle of the map, there is a special square that assigns points to players who occupy it. But be alert, the square is a risky place where you'll have to protect yourself against other players.
There are several perks that can be combined to accommodate your play style. Some players favor an offensive run-and-gun style, while others prefer stealth. Remember that heavy arms and armour will limit your moving pace. Smaller arms and lighter armour help you to move more easily.
Each Gats.io server can accommodate a maximum of 64 players. Based to how many users are on the server, the map region can dynamically grow and shrink. This means you won't have to drive far to get a piece of the action. The map's out-of-bounds areas are covered in a deadly fog; you'll be able to live in the fog for a little while, but don't hang out there too long!
Visit our subreddit at /r/Gatsio/ for the most recent advice, plans, and game news; a link is available in the gats.io footer.
Related Games