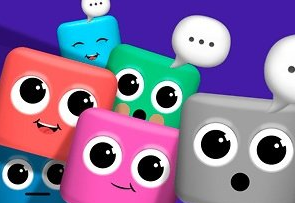 Witz.io is a witty, competitive party game. Play against up to ten other players to see who can come up with the most amusing and original answer to the prompt in order to defeat the other team. Vote for your favorite response after each round, and others will vote on your answer. The best response from the previous two rounds becomes the prompt in the third round, and you must come up with the best argument that fits with the expression. Vote for the top three in the third round! The game's winner will be the one with the most points at the end.

Control:
- Form words or sentences in response to the prompt.
- To produce comments, click on emojis, matches, or speak.
- To vote for your pick, click on the card.
Pick a Creature:
Choose a creature from a variety of colors on the home screen to better suit your gaming style. When you click on a character, you can make them chat, show emojis, or jump about. When you communicate with the little boys, they have a lot of personality.
Private Lobbies:
Create your own private lobbies to play with your friends and family. The game play is the same, and the controls are the same as in public play. To share the connection on any messaging network, copy the private key at the top left.
Share Jokes:
Share screenshots of the funniest jokes with your followers and friends by saving them to your camera roll and uploading them to Snapchat, Instagram, or Facebook. Instead, use the Twitter link to create a generated image and share the funniest jokes with your followers and friends.
Related Games