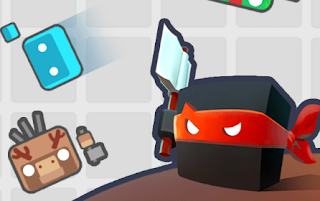 Zlax.io is an.io game with a twist – in this multiplayer fighting game, you must throw axes to defeat your opponents! Until entering the arena, you can choose from a variety of skins and colors, as well as your username. There are a number of throwing axes scattered around the map – you must pick these up and aim them at your enemies to destroy them!

Additionally, there is a collection of colored gems that you can obtain; as you collect them and pile up kills, the amount of axes you can hold rises, allowing you to throw more axes without having to collect them from the floor. Your character even has an anger bar, which fills up when you kill people. When your anger bar is complete, you will be able to throw axes indefinitely and become resistant to damage for a limited time, so use it wisely! Keep running, picking, and tossing! Improve your axe throwing skills in Zlax .io today!


Control:  Using the mouse to monitor the character and collect the axes in the arena. To strike, press the space bar or click the left mouse button. You will sprint away from your enemies by right-clicking the mouse or pressing W key. When you level up, you can gain more slots to hold more weapons!
Strategy: Use the axes wisely and throw them as far as you can to destroy as many enemies as possible. When you don't have an axe, use your dash to flee. Fill your anger bar to become the most lethal! In rage mode, hurry to strike the top scorers!
Ziaxio is a strategy io game in which the arm is an ax. Check out the Zlax io game, which has a unique theme! Pick up the axes and aim them at the opponents to destroy them!Kill as many players as you can to advance in the game! The higher your rank, the more axes you can bear!
Related Games