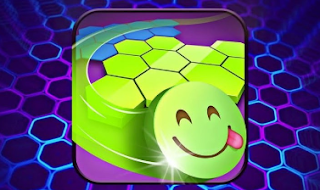 Hexar.io is a fantastic.io game in which you manipulate a colored circle and must collect as many hexagon blocks as you can. Its gameplay is close to Paper.io 2, another fantastic casual cooperative title. Link the trail from non-owned blocks to your owned ones to grab blocks. When leaving a trail, be cautious because if an opponent reaches you, the game is over. Begin gradually expanding your domain to aid your maneuvering. When you see other players leaving too far away from their field, take advantage of the opportunity to reach them! You will be killed if you touch your enemy in the head. Collect green circles to speed up. Have a good time!

Control: You switch automatically; to change course, left-click on the desired field.
Gameplay:
- Consume as much land as possible;
- Use your tail (string) to paint the empty hexagons or the hexagons of other players, then return to your base to enlarge your field.
- Snip off other people's tails
- Hit another player's tail (string.io) or cover all of his territories to kill him;
- Collaborate with your mates to overcome the Hexar world;)
- On the track, catch boosters to improve your speed;
- Becoming the game's greatest invader to earn a gold/silver crown.
- To get a pirate cap, become a pro assassin.
Play and conquer online with millions of other players as you attempt to create the largest hexagonal territories possible in the best paper-like action ever! Hexa game io is an online multiplayer action game in which you must extend your lands and defend them against invading forces!
You begin the game as the owner of a small territory (base) on a paperio area.
Grab as much land as you can, don't let other players take your ground or kill you, protect your zone, and figure out the best way to win!
Related Games