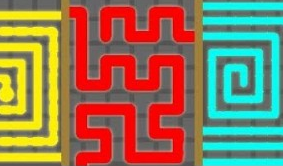 TileMan.io is a territory io game in which you can use your neon colors to conquer the land and become the strongest. Will you govern the most territory? Can you sever the competition's neck and snatch their territory? Do you have what it takes to be the supreme Tileman.io player? Travel quickly and wisely. Use technique to sever the opponent's connection and seize their territory. You are a noble neon dot in the future's gray grids. Your only goal is to gain ground by stretching out and then circling around. Build a mighty empire of flashing neon grids by outwitting, outmaneuvering, and outlasting your enemies. Act quickly, move wisely, and move to victory!

Control:
- To move, use WASD or the arrow keys.
- E or P for a pause
- To exit the game, press Esc.
- Enter to avoid death/play:
Touch controls and the Numpad are also provided.
Features:
- A.io game influenced by Paper.io and Splix.io.
- You have the ability to halt the movement.
- Several game modes are available, including an Extreme Speed mode that allows you to play the game at breakneck speed.
- Mobile browsers are supported.
Game modes:
- Normal mode
Map size and speed are also natural.
- Rats mode
Increased player count and a smaller map. As a result of these factors, the territory is continually under threat.
- Extreme speed
Extreme pace plays move at an 8-times quicker pace. To be good here, you must have some talent or luck.
- Arena
Ultimate is a small map that can be used to battle other players.
**More game modes are in the works for the future.
TileMan.io is a fantastic multiplayer io game in which you must attempt to grab as many blocks as possible. You begin with a random color of block and must attempt to convert all of the blocks on the map to the same color. You can transform blocks by forming a full square; the enclosed blocks can change color of your choice. This may seem to be a simple task, but keep in mind that there are other players to deal with! You must either stop them or attempt to catch them within your squares to force them to collide with you. Take your time and don't charge in with all guns blazing! Can you defeat the TileMan arena?
Related Games