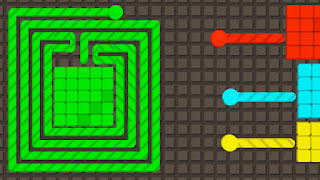 Splix .io is a fun game inspired by snakes. This is a game on Io territory where you use your lines and shapes to occupy space. In the Splix io world, you control a colored line and own a piece of territory, this area can be expanded by drawing shapes with a line and connecting them back to your existing territory. When you do this, you will be surrounded by opponents trying to do the same thing, you can attack or get attacked in this game by crashing into the drawn line or area where the right is claimed . In addition to playing solo, you can also invite your friends to join a cooperative match. Have fun!

Control: Your snake moves automatically, guide it with WASD or arrow keys.
Platforms: Splixio is a web browser game (desktop and mobile).
Featured:
Developer : Jesper the End developed Splix .io.
HOW TO PLAY
I've covered most of the basics of Splix io games, but here you'll need to slowly expand your area into smaller segments as it's safer and more efficient. Remember that you cannot make a figure so large, there is a limit that when reached will kill you, so I recommend adding them in smaller steps. In the end, you will want to occupy a huge amount of land or even half of the map, if you feel ambitious, this means you will have to occupy some of the places where your enemies have settled, right on the line. destroyed, all their areas disappear with them, so use it to your advantage.
Conquer as much land as possible with your cube snake
The object of the game is very simple - use the arrow keys to move your dice snake and try to gain control over as much land. While playing the game, you have to make official loops with the snake - any blocks in the loop (sent back to your lands) will be under your control. If another player crashes into your trail, you'll die - that's why you need to use strategy and try not to overdo it when conquering new territories. Once you are on your land you are safe, but once you leave the area, you can attack other players.
Play alone or with a large group of people
Unlike other similar games, Splixio allows you to play in a team with other players from all over the world! Team action is very epic. Work with your teammates to win cards and destroy your opponent's players. Team members can help defend your territory - make sure you fill in blocks so you can protect them too. Why not try this epic multiplayer game today and see if your teamwork goes to zero?
Related Games