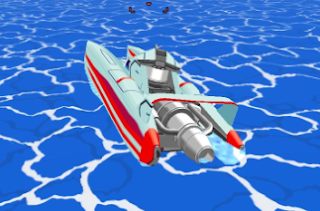 Speedboats.io is a 3D arena shooter with lightning-fast boats that can be upgraded with turrets. Through the laser, you can burn your enemies to ribbons, blast them apart with the grenade launcher, or outmaneuver them and force them to fall.


Control:
- WASD/ arrowkeys to move
- Left mouse to shoot
- Right mouse/shift to boost
When you kill your opponents, power-ups can drop at random, so be aggressive and gain supremacy early. Kills are worth 100 points, with an additional 25 points earned for each consecutive kill in a streak. For crashing, getting blown up by your rivals, or else reaching your demise, you lose 50 points. Destroy your opponents and use death to your advantage to rise to the top of the rankings.
Strategy:
Power-ups are king, and the only way to get them is to destroy other players.
—Laser: With its lightning-fast shooting speed and long range, this is the ideal tool for frying the opponents from afar.
—Grenade Launcher: Grenades are the slowest weapon in the game, but they do the most damage of any weapon. A professional player can capture several opponents inside the blast zone at the same time.
—Machine Gun: Significantly improved shot speed. A few seconds of intense fire will defeat any opponent, but beware of the recoil.
—Explode-o-laser: A laser with a boom at the top.
—Shrapnel Gun: Fires a shell that bursts into fragments. The more bits that strike the target, the more harm is done.
—Spread Gun: A shotgun-like weapon that fires bullets in an arc.
—Double Shot: Two cannons fire at the same time.
—Homing Shot: Bullets that seek heat.
Each power-up lasts just 30 seconds or before you die, so strike hard and quick! However, be cautious since colliding with obstacles can cause harm to your hull.
Related Games