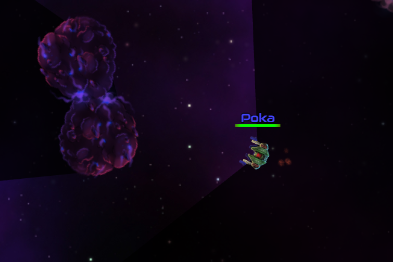 DarkNova.io is a space-themed team-based top-down shooter title. Join the red or blue squad as they compete to defend/steal the gem or plant/defuse the explosive. Of note, you should still simply annihilate the other team as a means of victory. Score kills and capture team victories to earn more money, allowing you to buy new ships and modifications in the next round. If you enter in the middle of a round, you will be a spectator before the next round begins, but rounds move quickly!

How to play: To use the support menu, click 'H' at any time. WASD controls your ship, and it aims at your mouse pointer. (We strongly advise using a cursor rather than a touch pad.) 'P' brings up the store, which is only available at the start of each round. (Hotkeys are available in the store to help you shop faster.)
Strategy for Dark Nova
If you die, you will become a spectator for the remainder of the round. Your life is precious, so use caution when attacking the opposing side. Play cooperatively or attempt to creep up behind your opponent, remaining in their blind spots.
If you fight, you don't have to destroy their whole team; simply creep in, take the stone, and return it to your base. ;)
Don't hesitate to buy ships that can counter the enemy's strategy. Similar ships do well on various charts. When you run out of money, stay back and try to pick up various mods dropped by dead players.
Related Games