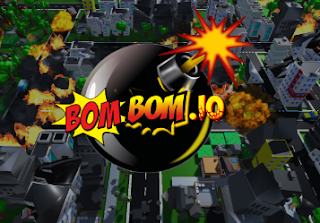 Bombom.io is an iogame set in the future. In Bombom io, you control a retro bomber plane and your mission is to inflict as much havoc as possible. Navigate over a wonderfully made 3-D city and auto-drop bombs on various structures. Your goal is to climb the leaderboard and beat other teams. You'll need to map the map tactically and make strategic decisions that allow you to bomb as much as possible. Stop larger players; colliding with them will cause you to die and be reset. As you bomb and earn points, the size of your plane will increase. The larger you grow, the more unwieldy your ship becomes; this is a game for only the most talented players. Well, you are winning, but there is an equalization mechanism that tends to keep things on an even keel. Another interesting aspect of this game is that all of the other planes in the game are simply other competitors from all over the world. Iogames are, at their heart, MMO games in which the competing players aren't just computer controlled AI, but rather other people like you. Competing against them is much more complex than outwitting an algorithm. Do you believe you have the skills, intelligence, and determination to outrun your opponents, blast the city, and become the supreme bombom.io pilot? We believe in you; now show us!