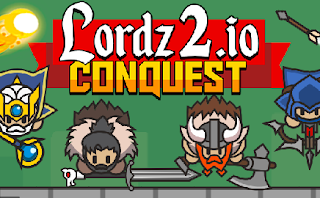 Lordz2.io is an online tower defense game set during the reigns of queens, lords, and wizards. Lordz2.io: Welcome to Lordz Conquest, a new strategy.io game in the Lordz.io universe. Build the most powerful army to conquer new lands, extend your empire, and unleash the best HEROES!


Control:
- W,A,S,D, or Mouse to move
- Strike the closest building by clicking somewhere.
- When you click on a house, you will be able to attack it.
- Power is enabled by pressing E or right clicking.
- Split by space
- B : Build Menu
- U : Units Menu
- F : Formation Menu
- Y : Units Upgrades Menu
- V : Rewarded Videos Menu
- C : Change Formation
- M : Show Mini Map
- L : Show Leaderboard
- Enter to Open Chat
- Esc to Pause Menu
What's new: A HEROES SYSTEM Of EXTRA POWERS, - Infantry companies, etc. - Hundreds of new structures to unleash new troops, - WALLS!! (Construct walls to keep other players out of your base.) - Advanced FORMATION scheme - plus much, much much!
Strategy:
- First, build a castle. You can recruit simple units in the Units Menu until you have a Castle (U).
- Build a Stable to obtain Cavalery units, an Academy to obtain Mages, and a Monster Den to obtain Dragons.
- Create the Forge to gain access to Unit Upgrades.
- Build Archer Towers or Mage Towers and upgrade them to protect your foundation, and surround it with a wide wall to make it even more stable!
- Destroying other players' buildings will get you a lot of Gold and Victory Points. In the Conquest Mode, if you earn enough Victory Points, you will be able to enter new territories.
**HINT: Place the troops within your own army using the Formation scheme. For eg, do you want your archers to be in the middle of your army to defend your hero, or on the edges to have more range?
Related Games