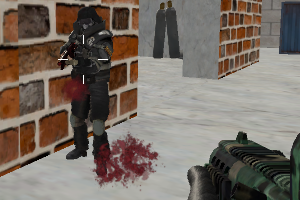 Rebel Forces is a first-person, action-packed shooting game in which you put the boots on the battlefield as an ultimate soldier. You may play online or alone in campaign mode in this game. Choose anything you choose, and blast down hostiles on your route. The campaign mode is made up of tasks in which opposing forces must have a military base deeply deployed. You will earn money to buy upgraded weapons and equipment. You may combat opponents from across the globe through online mode.