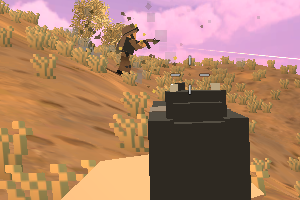 Crazy Royal Battleground is the funny royal sandbox combat game you have to fight with other players and live the longest time. Parachute from a plane and select the right place, be quick and choose carefully since before other players you will have to pick up weapons concealed in the countryside.

Move about the area carefully gathering weapons as you're fighting other players. Be careful about the map, as the danger zone invades the map, which results in a reduction in the play area and an increase in the activity. Don't get trapped in the zone of danger since it's going to hurt you. Now, soldier, go to it.