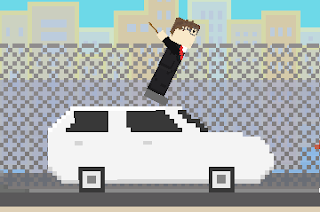 Rooftop Snipers is a frantic two-button sniper game for two players. Play with a pal or train against the machine in this rage-inducing action game that is comparable in design and gameplay to smash classics like Soccer Physics and Wrestle Jump! It's one of our many fantastic two-player games that you can enjoy with a friend!


Control:
Player 1 Controls
- W key to jump
- E key to shoot
Player 2 Controls
- I key to jump
- O key  to shoot
Features:
—Very loud music
—One and two player modes
—Many diverse worlds and costumes
Jump to avoid being hit, hold the button to lift your arm, and let go to fire. The objective of this game is to knock your opponent off the platform. The player who hits 5 first wins the game.
Related Games