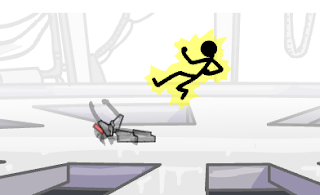 Electric Man is a fantastic stickman fighter game in which you must battle a series of enemies using various punch and kick combos. Before you begin the game, you can customize your stickman's name and colour, as well as the difficulty level (easy, normal or pro). Once you've decided on a character, you can go through a tutorial that teaches you the basic game mechanics and step sets.

You can face a variety of enemies during each battle, and you must use your move combos to beat them! You have the option of using three separate fast movements (A, S, and D) as well as three strong slow motion moves (Q, W & E). The movements change based on whether or not you're going and which direction you're approaching your opponent. The move set is awesome, and your character will deal some serious harm! Slow motion movements deplete the battery capacity, which recharges with time, so use them sparingly. As you advance, the enemies become more difficult to defeat, and you must fight quickly and skillfully to survive! Can you beat each stage and become the ultimate stickman fighter?