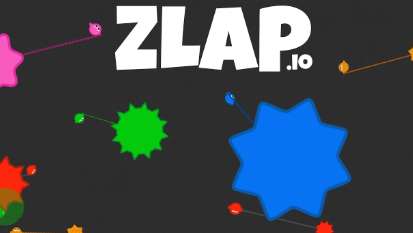 Zlap.io is a free-to-play battle arena in which you begin as a blob-like character wielding a flail as your weapon. Everyone's flail deals the same amount of damage, except when you say kills, your flail enlarges, making it easier to catch people off guard.

Control: To switch, use the WASD or arrow keys, and swing the club with your mouse. Hit other players to help your club develop!
How to play: Zlapio can seem difficult at first, but once you get a feel for it, you'll discover that it's as straightforward as it is enjoyable. Since your character and flail move separately, you can avoid oncoming attacks while striking back. There are no food orbs in this game; the only way to increase the size of your flail is to destroy other people; as a result, the game is action-packed and highly exciting. We propose that you swing your flail around from the start and try to knock someone's head off while still avoiding being hit; one of the cool things about your flail is that it can block enemy flails, so use this to your advantage!
In Zlap io, our newest .io game, swing your club and kill other players! Alternatively, you might try Splixio, Slitherio, Gunrio, or some of the other io titles!
Related Games