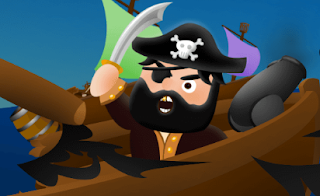 PirateBattle.io is a fast-paced action game in which you battle other pirate ships while collecting coins. The coins can be used to upgrade various parts of your ship. Ships that are sunk will drop the coins they have accumulated. Customize your ship with various sail colors and one of the 200+ flags available in the customize menu to make it exclusive.

Control:
- Move and fire with your mouse.
- Use space to get an advantage.
- Use keys 1, 2, 3, and 4 to upgrade your ship if you have the funds.
- You can still use your mouse to press on the update button, but doing so is inconvenient since your ship would follow the mouse.
- Shooting has a 1 second cooldown and boosting has a 3 second cooldown.
Strategy:
When you have enough coins to buy an improvement, you can pick which part of your ship you want to change. Upgrades are classified into four types: You begin with each tier at level 1 and can upgrade them before they reach level 8. If the stage progresses, the cost of the enhancements rises. Upgrading your health gives you more HP and raises the size of your ship, making it easier to strike. Upgrading your pace makes you quicker, but it also increases your turning angle, which can be a challenge when making tight turns. Upgrading your armor will reduce the amount of damage you receive from incoming projectiles. Upgrading damage increases both the damage and the range of your bullets.
Battle tactics
It is important to stop 1v1 battles with ships that are bigger than you if they have maximum health in the early game. If other ships are on fire, you will see if they are damaged.
A destroyed ship can dump coins on the map for everyone to find, so it's a good idea to use the boost to get there before other players do.
When battling other ships with similar strength, you can try to get behind the other ship, like in a dog fight, to get a clear shot at them.
If you crash with other ships, you will be slowed down; use boost to avoid conditions where you are trapped by other players.
If you're playing with a mate and want to take down another ship, use slowing as a tactic. By colliding with the ship, your friend will slow it down, making it easier for you to fire it.
Related Games