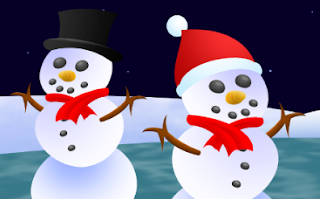 Snowwars.io is a fast-paced Agar-style game that throws you into the middle of an ice-slicked arena where only the strongest live. Hell has frozen over, and the snowmen are on the rise. Legions of living snowmen sharpen their frail fingers and slide about, ready to kill. Collect snowflakes to grow your Snowperson's height, and roll over powerups to unlock a variety of special abilities.

Control:
—Mouse: Move the Snowman through the ice-filled arena.
—Click to throw snowballs at your enemies.
How to play: Collect snowflakes to get larger and healthier. To inflict damage to other players, throw snow balls at them; hitting them will also knock them back a little in the way you're aiming. You have only 5 shots before you turn into a mound of snowflakes for the other players to pick up. That is, unless you collect one of the health packs dispersed around the map. The health packs will restore 30% of your overall health. Other powerups can give you an offensive edge when interacting with other teams. Running into other players would not do any harm, but you will be pushed apart. This can be helpful in some situations where you try to drive people into risky situations.
Gameplay: Build your own snowman and rule the ice world! There are eight different hats to pick from, and you can even skate without one. The crown can only be obtained by finishing first in one game. The scarf can be customized in one of 27 different colors. To do harm and avoid being struck by other teams, throw snowballs. If you have suffered damage, you must find a health pack to replenish some of your lost health.
Powerups
On the diagram, there are three kinds of powerups:
Boost
The boost powerup grants you a boost that lasts 3 seconds and decays over time. This can be effective in a variety of situations, such as catching an opponent or being the first to loot snowflakes from a fallen snowman. The boost powerup is the most popular on the chart.
Rapidfire
Rapidfire transforms the snowman into an electric fire canon that fires three snowballs per second for five seconds. During this time, you will not have to press to shoot because it will do it for you. Snowballs deal the same amount of damage as normal snowballs. In an offensive scenario, this is most likely the most effective powerup.
Shoot backwards
When you fire, you will be able to shoot an extra snow ball backwards.
This can be helpful when escaping from opponents and knocking them back when you sprint. If you are surrounded by opponents, it will also greatly increase the odds of winning.
Powerups can be used in conjunction with one another, theoretically allowing you rapid fire in both directions if you pick up certain powerups quickly. The combination is only available when the powerups match.
Tactics
It is entirely up to you if you choose to play the game, whether you keep calm at the edges and creep in for a kill or you charge into the center like a madman. The most effective strategy is possibly to collect some kind of powerup before engaging in combat with several enemies and then retire after taking damage to find a health bag.
SnowWarsio is a fantastic multiplayer fighting game featuring snowballs that is Christmas and winter themed! What better way to spend a winter day than catching snowballs and firing them at your opponents while attempting to avoid incoming shots?
This is what Snow Wars allows you to do. To try to exclude other players from the battle, you must control a snowman and throw snowballs at them from all over the world. Collect snowflakes on the field to grow your snowman and the number of snowballs you can throw. Conquer the snow wars arena and become a snow battle legend today!
Related Games