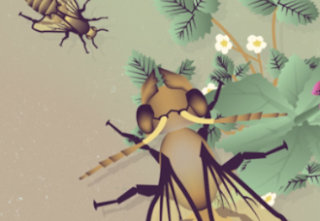 Monarchies.io is a cooperative strategy game in which you play as a queen honey bee who must order her staff to construct a powerful army. From collecting nectar to extending your territories, you must carefully handle every factor. Keep an eye out for other bees and best of luck!

Control:
- Press and hold the desired location, and the queen bee will fly there. You may also shift your queen around by using the arrow keys.
- Create a new hive by pressing the New Hive button (Hotkey: 2).
- Find a nearby hive cell by pressing it. Use the Lay Egg button to add eggs to it (Hotkey: 3).
- Foragers gather pollen and nectar from flowers and return it to the hive.
- Nurses harvest pollen bee bread and feed it to the larva, allowing them to mature into full-grown workers.
- Builders consume honey and construct new cells inside the hive.
- Toggle warning pheromones by pressing Attack (Hotkey: 4). Your staff will begin attacking rival bees, mites, and wasps in the region.
- Varroa mites are parasitic insects that can fly on your workers to your brood and consume and reproduce on them.
- Nurse bees groom mites from other workers. You may even use Attack to instruct your staff to destroy nearby mites.
- In the main menu, press 'Login' and type a new email address and password.
- If you have a player account, clicking Eat Honey would connect it to it. Honey can be used to buy new bee varieties and skins for playable bees. You may pretend to be a bumble bee, a cat bee, violet bees, or blue bees.
Features:
- Multiplayer game of bees
- There are also solo and multiplayer modes.
- Beautiful graphics and artifacts
Tips:
- Begin the game in solo mode and battle the AI-controlled bumble bees. Since your competitor queen bee would have all of the same skills as you, seeing and imitating them is a smart way to learn how to play.
- Pupae that hatch into worker bees belong to the closest queen at the time of birth, so make sure to drive out any attacking queens and be present when your competitors' workers hatch.
- Pollen taken into the hive is gathered and used to make bee bread. Bee bread is fed to larvae in order to develop them into pupae and begin their development into full-grown adult workers.
- Place your new hives on top of flowers to increase the amount of pollen collected by your workers.
- Before launching an alert pheromone attack, assemble the staff into a swarm by activating 'Swarm' mode first.
- Allow attack mode when there are wasps around. Unless you toggle them to strike, your staff will do no good.
- Enable no mites to enter your hive. They will destroy and replicate your brood. To quickly dispatch them, push them away and switch to attack mode.
- Get on the leaderboard in multiplayer mode by keeping a significant number of jobs alive at the same time.
Monarchies io is a free-for-all top-down real-time game in which the player plays a queen honey bee. Create a hive, lay eggs, and assign duties to your worker bees. Workers will forage for nectar and pollen from flowers, nurse your brood to produce new workers, groom mites off of one another, create new cells on your hive, and protect against wasps and other players.
Related Games