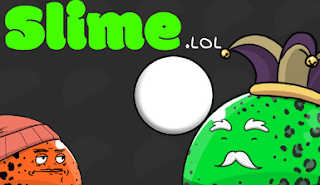 Slime. lol is an entertaining team-based sports simulator game. Slime is a casual multiplayer volleyball, soccer, and hoops simulator. Don't let the name deceive you: it's not a disgusting excretion from an alien overlord. You'll face a gleeful foe who is hell-bent on kicking you out of the league. Spike the way to the top of the leaderboard by dominating the game with parries, dodges, power hits, and penalty kicks. This game features a dynamic physics engine that allows you to grasp, predict, and react to how the ball bounces.

If you pay attention, you will eventually discover where it will go when you touch it at a certain angle. Long-term players who pay attention and use their brains as well as their reflexes to outsmart, outspike, and outplay their rivals are rewarded. You must also use your "power shot" wisely, which is a kind of shot that allows you to serve, hit, and shoot quicker and more powerfully. When used sparingly, this can catch your opponents off guard and might even get you a surprise point. You can also change your appearance by using the number pad. Make use of your thoughts to deceive your rival.


Control:
—WASD for movement
—Space bar for jumping
—Shift for power shot
—1-4 keys to use an emoticon
Related Games