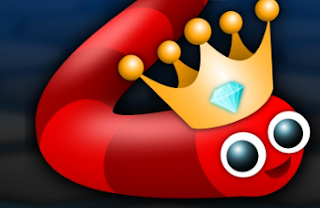 WormRoyale.io is a fun battle royale game in which you control a brightly colored worm and compete for dominance against other worms on the battlefield. You begin as a tiny worm and must rise in size in order to overtake others.

You gain weight by consuming the food spread across the map; each piece you eat raises your weight by one. You will quickly remove other worms until you reach a certain size! Will you escape the danger zone by being the last worm standing?


Control: Power the worm's progress with your click. To increase the tempo, use the left mouse button.
How to play:
- Run over the scattering gems on the map to rise longer.
- Avoid bumping your head against other worms or the map's side.
- Boost to get ahead of opposing players and avoid being squeezed as the map shrinks.
Features:
—The colour and accessories of the worm can be modified
— Battle Royale fashion
— You must mature in order to remove others
— Each game's play statistics
Gameplay:
Begin as an egg, hatch, evolve, and take over the battle arena! The map shrinks with time, and you can race for the victory royale with other teams!
To remove other worms, turn in front of them. Worms that are eliminated will drop all of the gems that they have absorbed during the round.
There are several super gems scattered across the map that are worth ten times as much as normal gems; boosting worms can sometimes lose super gems as well.
When cutting in front of other worms, boost to gain a strategic edge. Boosting can cause you to shrink and lose gems on the globe, so just do it when absolutely necessary. Even if you have no length, you can upgrade.
If you make it to the end of each round, it will take you about 10 minutes. The map shrinks slightly every minute, causing the worms to compete for a place in the end game. If you get too close to the tip, the worm will erupt. It is possible to be beyond the edge when it is shrinking until it has finished shrinking.
Tactics
Try to collect as much food as you can early on in the game because that will give you an edge later on. If other worms are attempting to consume the super gems, use boost to get them.
To see where other players are, use the minimap in the lower right corner. Navigate the map's center early on to prevent being stuck beyond the map as it shrinks.
One method for preventing other worms from accessing the map as it is shrinking is to go next to the edge of your worm if you are big enough.
Stats
The numbers above the minimap display how many players are already on the board, how many players you have lost, and how long it will take for the map to diminish completely. The game saves all of your games that you've played on the same device; you can browse through them all by clicking the stats button in the top right corner. Each game records your duration, number of kills, location, and date of play.
WormRoyaleio is a battle royale io game similar to Slither.io in which the room shrinks. The worms are growing in size, but the arena is shrinking. Who could actually survive such a catastrophe? Is it possible that it is you? Do you have what it takes to slither your way around a hex-covered potential map collecting gems in order to grow large? Will you defeat your enemies by duping them into crashing into you? Can you use your dash button wisely to avoid trouble, track down a possible victim, and win the game? The solution is in your hands and the decisions you make. Though Wormroyale.io is a fast-paced, real-time arena battler where strategies rule supreme, there is also some technique that must be incorporated into and player's particular play style.
And whatever it takes to stay alive.
Related Games