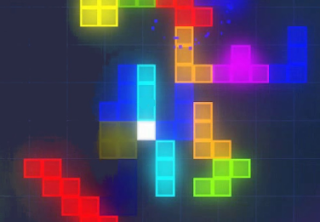 Tetrads.io is a top-down Tetris-style strategy game in which you gather block pieces to defend your central body. You can not only use these block pieces to protect yourself, but you can also gather them and build structures to fight your opponents. When you smash their main bodies, they can release blocks that you will pick up at random. Your aim is to build the largest and most powerful floating Tetrads fortress ever.

Control:
- Your Core Body block will follow the movement of the mouse pointer.
- To increase the speed of your computer, press the left mouse button (this consumes Boost, which refills faster when you have a smaller body.)
- Circumnavigate the arena, attaching Tetrad parts to the body for protection.
-You will die if an enemy Tetrad piece hits you.
- Using the lift to ram into other people, destroying their defences and hitting their main body.
- Be clever in your building. There are several ways to build your body form in order to strategically take out other players.
Basic Informations:
—Protect your central body by constructing a wall of blocks around you.
—Use your lift to ram into others, destroying their outer defences and immediately striking their hearts.
—Be clever with your constructions, such as constructing a spear and ramming into more formidable foes with your pace.
—As your mass increases, you can shift more slowly.
—As your mass increases, your boost potential will regenerate more slowly.
Tetrads .io is a no-cost iogame. Welcome to Tetrads io's retro-blip animation theme, a world where you are only a square in a world of shapes. To live, you'll need to search out other shapes and incorporate them into your own mass, then seek out and break smaller shapes. Each combat you engage in will cost you the average of your blocks and the opposing player's blocks as you ingest them, so choose your victims carefully and always choose someone weaker than you. Keep this in mind as you progress through the game because you will still be targeted by larger players.
To live and rise to the top of the leaderboard. Outwit other players and use the "boost" power-up wisely by clicking the left mouse button. This will help you to flee a possible attack or get the upper hand on a potential victim. The boost has its own power bar, which depletes easily when you use it and then slowly recharges at half the speed.
This is an ambitious game built from the ground up to be as enjoyable as possible when adhering to the mission of using no audio, no sound effects, no feature creep, and just one art asset (the Tetrad block piece.) Tetrad is a genuine minimalist game in the tradition of its forefather Agario. The game features familiar gameplay but a distinct aesthetic and a simple twist on how the player progresses. Instead of an ever-expanding circular cell, you can turn the chunk of blocks into any shape you choose.
**Goal:
- Circulate the arena.
- To protect yourself, collect Tetrad bits.
- Kill the adversaries.
Related Games