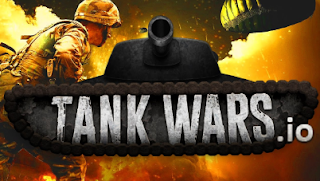 TankWars.io is a multiplayer io game in which you engage in an epic tank battle. Welcome to TankWars .io, one of the most thrilling and addictive browser games in the field of IO / MMO games. Take charge of your tank and annihilate the enemy until they annihilate you! Prepare to go to war against teams from all over the world. Make the most of your power ups. Keep an eye out for jets! Some are friendly air strafes, while some are dangerous air strafes.

Control:
—WASD or arrow keys to switch
—123456 to activate a skill
Features
—Two game modes now available, with more to come!
—Special skills that can be used
—Awesome visual effects
—View from above with a top-down camera
—Airplanes capable of dropping supplies or performing lethal air strafes
Strategy:
Team Conquest: Capture the zones for your team and be the first to reach 1000 points! This gamemode places a premium on tactics and teamwork. Play both defensively and offensively; teamwork is needed to maintain control of the map.
King DeathMatch:All is an opponent in King DeathMatch! Either kill or be killed! Each enemy kill nets you a portion of their points; the tank with the highest score at any given time is immediately awarded the crown and crowned King. To win the game, you must score 5000 points.
Related Games