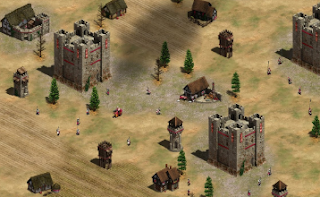 Feudal Wars is an exciting multiplayer military RTS game in which you must create and order your own army to battle other players from all over the world. You must construct a range of buildings, such as resource processing facilities, military training facilities, and testing facilities - each structure serves a particular purpose and contributes to the economy and army.

Train and study new divisions before deploying them to destroy territory and enemy bases. Think twice about how you plan your forces and keep your policy in mind at all times. This game has excellent and simple RTS gameplay and allows you to rule a variety of different kingdoms. Will you conquer the land and demonstrate your military prowess?


Control:
*Pick units by dragging the mouse over them.
* To switch units, right-click on the diagram (while the units are selected)
* Attack enemies by right-clicking them (while your units are selected)
* Use the tab key to see the latest players in the game as well as their statuses.
* Pressing CTRL-A will pick all military units that are available.
* Pressing CTRL-# will assign the currently selected units to a control section. Then, if you want to pick the category again, simply press the # key. For instance, you might put all of your archers on CTRL-1 and then pick them again by pressing "1"
* When you double-click a unit, it selects all units of that kind in the camera.
Features
—A real-time strategy game based on the well-known title Age of Empires.
—Featuring an original soundtrack
— Simple gameplay without resource gathering, just plan on positioning buildings and marching your army
—Many kingdoms to select from with varying skills
—Upgradeable units that alter their appearance
—Play with colleagues, AI, or other players from around the world.
How to play:
- Begin by amassing a small army of knights and a fortress (which shoots arrows). Knights spawn automatically from your castle; use them to seize more castles and spawn more knights.
- You also gain gold, a small amount for each castle you build over time and a small amount for each enemy unit you defeat.
- Purchase buildings with your gold, such as walls, barracks, archery ranges, stables, watch towers, and more castles. Archery ranges, for example, produce archer units that are effective against infantry. Stables produce cavalry, which are effective against archers.
Strategy:
- To win, you must conquer both castles, but castles still increase the size of your army. If you only have one castle, the army will only have a limit of 20 units. However, with two castles, you can field a 40-man army. Capturing castles, on the other hand, is the fastest way to progress in the game.
- Figure out which units counter which and construct them accordingly. It's a game of rock-paper-scissors. If your enemy is just constructing cavalry (horse-back units that spawn from the stable), you can build a large number of barracks, which contain polearm units that counter cavalry.
- For successful anti-archers, place watch towers behind walls. Archers just do minor harm to homes, so it's a viable counter. Cavalry is still very effective against archers.
- Any structures you build have the option to be upgraded (little blue icon with white arrow). When you upgrade a barracks, for example, you get a more powerful polearm set. When the population reaches its peak, you should certainly consider upgrading (currently, 100). Often smaller, stronger units are preferable to a larger number of weaker units. Have a plan for when and how much you can update.
- In the early game, you obviously want more units, so it's better to focus on more buildings rather than improvements (which produce more units).
Related Games