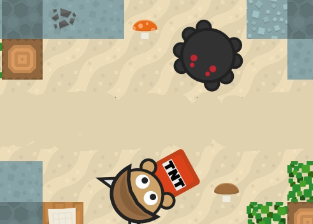 Cavegame.io is an.io game based on the Minecraft survival server! The cave is a vast map full of ores that can be mined. Accumulate gold to buy in the store and climb the leaderboard. You can make spears, bows, armor, TNT, and other weapons to battle other players with. To secure your money and gain more cash, you can also plant, create a foundation, and sell products in the store. Mob spawners can be used to gather items and XP, and XP can be used to enchant your goods!

Control:
- Use WASD to move
- Use numbers, scroll, or click your inventory to switch items
- Press E key to craft and open the shop
- Press SHIFT to sneak
- Press Q key to drop single items, SHIFT + Q to drop a stack
- Drop any inventory item by hovering over it and using Q or SHIFT + Q
- Hold left click to break blocks with your pickaxe
- Use left click to place blocks, shoot arrows, and hit players
- Left click to shoot your grappling hook, right click or Space bar to pull yourself with it
- Left click armor to equip it
- Right click or Space bar items on an enchantment table to enchant them
- Drag inventory items to swap their positions
Features:
—2D top-down camera perspective gameplay involving resource collection and crafting
—Placeable blocks for constructing bases
—Method of trading with other teams
—Teaming is possible.
—Fullscreen mode is available.
LEADERBOARD
The ultimate objective of Cavegame.io is to amass a large amount of gold. Gold can be obtained by digging it in caves or by using a gold generator. The worth of gold determines your place on the leaderboard.
BASES
You may make a variety of objects to aid in the construction of a foundation. Bases are useful for safeguarding precious objects such as gold generators. The key item for base construction is reinforced obsidian, which allows you to create walls that take a long time to crack.
FARMING
Saplings, which develop into plants, and red/brown spores, which grow into mushrooms, are the game's farmable products. Farms are useful not only for producing your own resources, but also for selling surplus goods to the store. By right-clicking farmable items with bones, you can make them expand instantly.
SHOP
The shop's money is gold. You can sell up to 5 items at once, and other players can purchase your item from the store in any quantity they want. The store is very useful not only for having goods that you need, but also for earning a lot of gold by selling objects.
MOBS
The game's mobs are mutants, skeletons, and snakes. They all have unique talents and act in very different ways. They appear around mob spawners. Mobs will provide you with a variety of useful tools, such as bones and network, as well as XP.
ENCHANTMENTS
Enchanting objects with XP is done by right-clicking them on an enchantment table. You can use up to 30 stages of XP at the same time, and more XP gives you better enchantments. Items may be enchanted with generic enchantments like sharpness for swords or productivity for picks, however there are even rare enchantments like looting and wealth, among several others.
TEAMING
Teaming is permitted in Cavegame.io, and a special object known as a Team Stick will assist you in collaborating with others. Hitting your colleague with the squad stick causes your turrets to miss them, allowing them to slip through your vault doors. When you strike each other with your squad stick, you will all see each other on the minimap.
SPECIAL BLOCKS
Gold Generator
Per 60 seconds, the gold generator spawns one gold ore nearby. When gold generators are destroyed, they often fall to the ground rather than being added to a player's inventory.
Turret
The turret fires arrows at your closest foe. This applies to both players and mobs.
Vault Door
The vault door is a block that can only be passed through by you. It serves as a stable foundation for everything else.
Barrier
Projectiles, but not players or mobs, will move through barriers. This encourages you to fire arrows or throw TNT from a more secure location.
Strategy: Begin the game by locating and gathering as much wood as possible. You will be able to craft instruments and guns as a result of this. Begin looking for diamonds in order to mine faster and provide stronger arms and armor. Once you have plenty of money, aim to locate a mob spawner and create a base near it. Begin farming and constructing your foundation by putting gold generators. Once you've established a solid foundation, begin killing mobs for XP and enchanting objects in the hopes of obtaining better armor and weapons. If you are pleased with the power of your armor and arms, you can go off and raid other players' bases. If you progress, you will amass gold and money in order to become the #1 Miner.
Cavegame.io is a fantastic game that is inspired by the legendary Minecraft. All you start with is a pickaxe and a sword; you must walk around the map and attempt to gather various resources in order to survive. This is an online game in which you can either share or battle other players - the choice is yours! You can also build foundations by laying blocks on the ground - let the imagination run wild! In Mineroyale.io, you can also play the battle royale episode.
Related Games