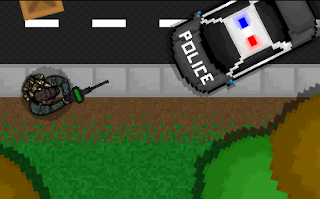 ShootEm.io is an io game in which you drive around, build barriers, smash the map, and kill other players in order to reach the top of the leaderboard! The more destruction you cause, the more players will try to destroy you! Another cool feature of this fantastic game is the ability to hop into cars and speed them around! Get in a patrol car, for example, and use it to crash into and destroy other players! How long can you hold out? Will you win the Shoot Em championship?

Control:
—To switch, use the WASD or arrow keys. Left click to aim
—Right click to join wall build mode, then click again to construct the wall
— Shift to sprint or drift mode
— To pick up an object or enter the vehicle, use the space bar.
Features:
—You can drive various vehicles
—There are several items to kill
—There are scattered guns and health kits that you can pick up
Strategy: Destroy artifacts and build a fort to reach and maintain the top!
Weapon types:
- Flamethrower - Destroy more items in less time.
- Machine gun - Fires a large number of bullets in rapid succession.
- Sniper - Slowly fires but deals a lot of damage.
- Shotgun - 4 bullet burst
- Rocket Launcher - Excellent for striking players across walls.
- Pistol - You spawn with it, so go find another pistol!
Related Games