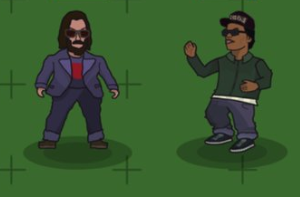 Automeme.io is a game of meme auto-battle. Choose your meme characters and strategically position them to win the auto battles against others!

Control: For each action, use the mouse or tap.
Lobby
A space will have up to ten players. After a while, the game will begin automatically.
Prematch
The player has a few seconds to choose a card from a pool of random cards. Following that, it is passed to another player. When all of the cards have been chosen, the preparation phase begins.
Planning
The player spends the most time planning. Pairs of players are assigned.
The primary objective is to put heroes on the floor (by dragging their cards at blue zone on the board). Cards cost mana to put, and the mana limit increases with each turn played.
There is a button on the bottom right that unlocks the store. It includes three cards, and after all of them have been purchased (by dragging them to the player's hand), a new batch is ready. By pressing the store button again, you can close the shop.
There is an object store one button up. Once you've opened this portal, you can purchase products by dragging them onto the hero cards below.
There is a ready button above the object shop button. If all fighting players are willing, the game begins immediately.
When you drag a card, two new buttons emerge. On the lower right, there's more. When a card is dropped there, a window with hero details appears (stats and abilities).
The second button is on the top left and occurs as the card being carried is drawn from the player's palm. When a card is dropped there, it is withdrawn from the hand and the game.
Battle
Following the preparation process, hero placements are made on all opponents' boards, and the positioned heroes battle each other.
The winner receives coins as a reward for their victory.
The loser receives less coins and his fitness is reduced.
The battle can end in a draw, inflicting little harm on both teams.
If a player dies with 0 HP or less, he is removed from the game.
The game is won by the last player standing.
Leveling up
When three cards of the same meme are obtained, they are combined into one of higher rank. The highest ranking is 3.
Auction
There is an auction for a couple of fights. It includes memes with a higher rating. Players will place bids on the card that is up for auction. The winner pays the price he paid, and the other bidders do not.
Death
When a player is eliminated, he or she is designated as a spectator. The spectator observes the upcoming fights.
Related Games