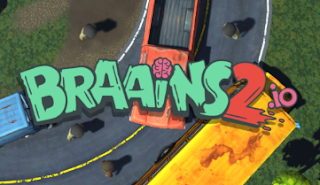 Braains2.io is the successor to the popular brain multiplayer game Braains. The graphics and gameplay have all been changed. You can now play in absolute 3D mode if you like!

You must choose between playing as a human or a zombie and attempting to kill the other players. Look for various items to move and hide behind. The controls are simple to learn, and the gameplay is much better than in the previous installment!


Control:
— Use the WASD or arrow keys to move
— To jump, use the space bar
— To strike, use the left mouse button.
Features
—Multiplayer zombie tagging game
—You play as a zombie or a human at random, each with a different objective
—3D graphics
—Movable structures that can be used as an impediment
How to play:
Braains2 is an epic io zombie tag game where you start as a zombie and your aim is to tag humans and transform them into zombies so you're not alone. Once you've bitten others, they'll help you in your quest to infect all humans. There are some buildings on the map with exits and rubble to cover those entrances with; keep this in mind and strive not to unintentionally doom your teammates who are seated comfortably in houses with barricades, since they will not be pleased. To be competitive in this game, teamwork is essential; if several people cooperate and block off an entry, you have a much better chance of surviving, so keep this in mind!
Related Games