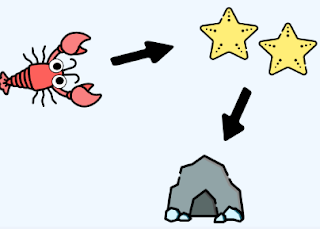 Golob.io is a risk/reward online IOgame in which you catch as many starfish as you can and carry them home to gain points.

Control:
- To switch, use the mouse, or on handheld devices, click and drag.
- To speed up, click anywhere on the screen, or on handheld devices, press the blue button.
Maximize your points by taking as many starfish as you can to your home without being killed by other players or monsters. Steal starfish from other players with a green circle when they have more than you. Plays with a red circle can be avoided because they have less starfish than you and will kill you. On your land, you appear white. Nobody else can see your house, but everybody can see white players. You can avoid being killed by explosions, but you can use bombs to kill other players.
Earning points allows you to advance in the game. For eg, the Booster upgrade allows you to go faster during a boost. The Shell update provides you with a longer period of protection despite remaining pink in colour. Alternatively, the Climber enhancements allow you to move quicker while you are in contact with walls/rocks. Upgrades raise your rating by one, changing the appearance of your character. Upgrades also increase the maximum number of starfish that can be stolen from other players by a factor of five.
Related Games