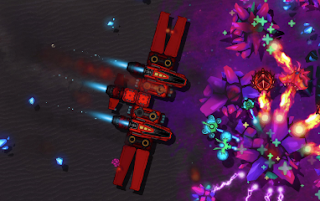 Exocraft.io is an io strategy game in which you can design your own tank. Build your own exocraft and expand your drone fleet to fight and mine your way to the top. Exocraft pits you and your allies against ancient guardians and other defences defending the world's most precious resources.

Exocraft is a permanent MMO, rather than a round-based MMO, where you can level up, ascend the leaderboards, and draw on the progress of previous play sessions. The more you progress, the more content and game modes you will be able to use.


Control: To switch, use the WASD or arrow keys, or left press. To connect, use the left mouse button.
How to play: The game is designed to be played in whatever way you choose, whether with a keyboard (WASD or arrow keys), a controller, or a touchscreen. The controls for combat, apart from basic movement, are very easy. Simply press a target to deploy your drones if you are within range of it. A long-click on a target would deploy all drones at once.
Features:
—Full-featured io mining game
—Customizable mining plane with a variety of pieces
—Buyable drones to assist you in mining and attacking
—The mining points are guarded by guardian opponents.
—Objects that are detailed and polished
—The ability to fly quickly to the trading post
Strategy: Since you are playing against the AI guardians on the planet in this game, it is in your best interest to be cooperative and team up with others. Many of the enemy groups would be far too strong for you to defeat on your own. The dynamics rely heavily on elemental strengths and weaknesses as well. Deploying water-based drones against fire guards, for example, would be much more powerful than deploying electric vs fire.
Exocraft.io is a fantastic multiplayer io game in which you are stranded on an alien planet and must mine the precious resources found on the surface. You pilot a mining ship, and your mission is to explore this mysterious world in search of wreckages and crystal points, then extract minerals from the wreckages and points in order to collect as many as possible. Keep an eye out for the crystal point guardians, as they will attempt to stop you and wreck your mining craft! When you gather minerals, you can sell them for a fee, which you can then use to update your craft with new tools, increasing your mining rate. You can also buy drones to defend your ship and battle the guardians. What are you waiting for? Begin mining right now!
Related Games