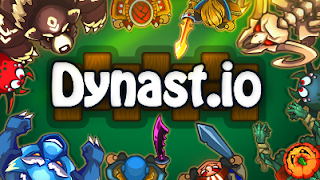 Dynast.io is an io survival RPG game in which you must fight monsters for loot! From the makers of GLOR.IO! You've never played a survival RPG game like this before! Build farms and castles, battle dragons, attempt to escape the winter, ride bikes and fire crossbows, fight for treasures, and conquer the server!

Control:
- Use the arrow keys to switch.
- Use the mouse to focus and the left mouse button to perform an operation.
- Use Tab/B/C/P/M to access the inventory/building menu/craft menu/map/teams.
- Hold move when constructing to build several times in a row!
- Break stacks by keeping shift when handling your inventory!
- Hold down the Ctrl key and left-click on an object in the chest to transfer it between your inventory and chests.
- T to throw things that are already fitted
- +/- to zoom in/out of the camera
- Use a 0-9 scale to pick the appliances.
- Enter to access the talk
- P to see the map
Features:
- Shields and Swords!
- Full inventory scheme with object storage in sessions!
- Create and build!
- Person and group transportation!
- Rapid fire!
- Assorted hats and guns, ranging from a club to a fireball cannon!
Related Games