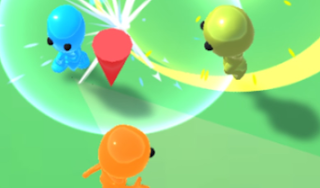 Crazy Jump.io is an entertaining competitive jumping game. In fierce jumping fights, you must compete against people from all around the world. Hop to move your character to attempt and kick your enemies out of the arena.

As you knock other players around, your character can grow in size and strength. There are a variety of cool characters to pick from, each with their own unique theme and appearance. See how you do in the insane jumping competition!


Control: To control your character, use your mouse. You want to stay away from those teams who are bigger and stronger than you.  To jump, press the left mouse button. Since there is a gap between jumping and touching the ground, you must time the leap perfectly. Your leaps send shockwaves upwards, pushing players out. The more people you fight back against, the bigger and heavier you can get. Strike enemies that are closest to the edge of a cliff in order to permanently exclude them from the game. To stomp, use the space bar.
Features:
—Enjoyable gaming
—There are seven different character choices to choose from
— Various platform colors
— Platform that is constantly dropping
Crazy Jump is a fun, cheap, and simple iogame that anyone who enjoys smashing will enjoy! Guide your gummy individual with your mouse, then left click to hop up and smash down. Send shockwaves rippling out around you, which become larger and more powerful as you knock down more opposition players. Ultimately, you'll want to kick enemies over the side of a cliff or vibrate them off the edge with the shockwaves. In this sleek and entertaining arena battler, you will run, hop, and smash your way to victory. Crazy Jump io is a fast-paced MMO in which you can smack other players off a cliff and into eternity. You will grow tall and rule the field by outthinking and outplaying your opponents. Put your skills to the test against the tens of thousands of other players. When the arena crumbles around you, do you have what it takes to outplay your opponents and survive?
Related Games