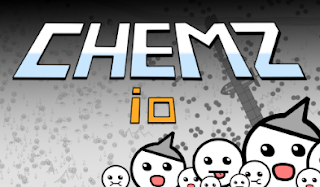 Chemz.io is an online airplane driving game in which the aim is to cover as much ground as possible. You will use the power-ups scattered across the map to aid in the combat.

Control:
—You can fly the plane with either your mouse or your touchscreen.
—Press [Q] to drop a previously discovered bomb.
—Press [E] to launch a missile you obtained previously with a powerup.
—Press [SPACE] to toggle a speedup that was previously hidden in a powerup.
—Make good use of your powerups!
When you begin the match, make sure to choose a server that is close to you. There will be no pause this way.
Chemz .io is an adorable multiplayer action game. The game is inspired by chemtrail conspiracy theories and is ultimately a spoof on contemporary aluminum hat society. Fly around in your jet, poisoning as many people as you can. The more publicity you get, the larger your plane will be and the more people you will be able to poison.
Collect power-ups to get weapons, speed boosts, and temporary larger wings, allowing you to poison still more people.
However, be mindful that some will attempt to target you in order to win your coverage! When you kill a player, you gain all of his coverage, as well as a larger aircraft. Let other people travel through your chemtrails so that they are contaminated for a while and only use your chemtrails instead of theirs. The means he'll get you coverage!
Will you cover the whole map with chemtrails? Give it a shot!
Try not to collide with other teams, since this will deplete your fitness and possibly destroy you. But don't worry, with each plane upgrade, you'll get a new life!
Your wings will grow larger with each coverage stage you complete, and at some point, you will have a completely different plane model. The next wing update can be seen in the upper right corner of the screen.
Log in to save your player progress and win XP and trophies for prizes. There are over 30 different awards for various activities in the game. Extensive makeup for your plane are the prizes. Make a one-of-a-kind plane with your own eyes and wing emblems. You can also customize the color of your plane to make it special to you. If you choose the same color as anyone else in the same match, they will see you as a different color.
To change your eyes, wing badges, and plane paint, go to the main menu and press the customization button. Any cosmetics are locked if you haven't unlocked all accomplishments. To save your player progress, you must be signed in.
Send your mates a connection to your match so they can join in the fun! It's more interesting to play with someone than it is to play alone, and you could be able to form a team to battle other teams!
On the home tab, there is a weekly ranking that is reset every Sunday morning. Demonstrate to the rest of the world that you are the top player on the game servers!
Related Games