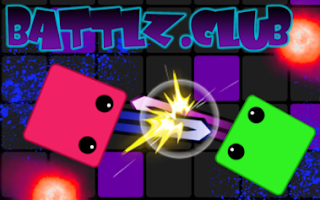 Battlz club is a fantastic online arena game in which you must compete against everyone and all for glory and the title of club champion! Despite the fact that your character is armed with a sword, there is no clear combat; instead, you must try to force your opponents into the direction of the blazing fireball! If you are struck by a fireball, you are instantly killed!

Swing your sword or use your dash feature and attempt and drive or outmaneuver your opponents - the more you throw an opponent, the farther they can travel, so keep that in mind! This game is a lot of fun, and it's a perfect test of ability and reaction time - can you rule the Battlz.club?


Control:
—Left mouse click to strike
—Right mouse click to dash attack
How to play: Battlz is better played with a controller, but if you just have a trackpad, don't worry, we've got you covered. The Z/X or >/? keys function as right/left clicks. (Placed so that you can use the trackpad with either your right or left hand)
Hitting other players throws them back; try knocking them into the fireballs to save their soul. If they don't die as a result of your strike, it's okay because their damage meter will increase, and they'll go much faster the next time!
The map is littered with energy balls. This contribute to the filling of your dash meter. A dash attack does less damage than an attack, but it knocks them down a little more than an attack would. You will use this to finish off a foe or to flee a fireball that is closing in on you!
Go out there and catch those souls; how much can you ascend in the Battlz Club's elite member ranking?
Features:
—You have the option of changing the color of the character and weapon.
— There are a lot of fireballs that are constantly moving around
— Gather blue souls to replenish the dash
— Timer for respawn
— Excellent sound effects
Battlz Club is an io game about a special war club for members only. Members engage in close-quarters warfare in order to steal as many souls as possible. More souls must be collected in order to progress in rank and title. Skilled members can progress further and the larger your present 'Soul Streak' becomes, the more experience is rewarded for each soul obtained.
Related Games