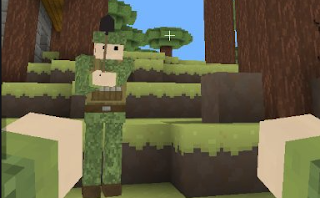 Voxiom .io is a 3D multiplayer first-person voxel shooter with destructible maps that can be played in real time. Popular games like Minecraft, Fortnite, Counter-Strike, and Call of Duty were used as inspiration for the game. The game currently has two game modes: capture the gems and battle royale. To win, players must strategically build, craft, and shoot.

Control:
- W - forward movement
- S - retrace your steps
- A - turn left; D - turn right
- Jump with the space bar; open inventory with the X. (use the mouse left click and right click to swap items)
- Hold C if you want to crouch.
- Hold Shift if you want to sprint.
- View the map by holding down the Tab key.
- Left Mouse Button - primary action on item: shoot / use item / consume Item
- Right Mouse Button or F - secondary action on item: aim / switch block placement mode
Tips:
- To improve accuracy, press the F key or hold down the right mouse button.
- Guns can be upgraded via crafting.
- Some buildings consistently produce more loot than others.
- Switch to wall mode with a right click when holding a block to put blocks in a batch.
- Join the Discord server to chat with other members of the community and receive the most up-to-date information and news!
Inventory
Voxiom.io has a constantly changing inventory. On the battlefield, players must meticulously maintain their inventory to ensure that they have the most valuable items. 5 ammunition slots, 5 backpack slots, and 5 hotbar slots are all given to each player.
Crafting
The crafting system should be used to make and upgrade guns and blocks. Players can create basic items in their inventory by default. More sophisticated crafting, such as gun upgrades, requires the use of the workbench. By standing close to a workbench block and opening their inventory, players can gain access to the workbench.
Weapons
Weapons are divided into five tiers: common, uncommon, rare, epic, and legendary. The color of each weapon indicates the weapon's tier. Weapons with higher tiers have improved stats like damage and reload time. The game also has accuracy and recoil systems. The F key or the right mouse button may be used to aim down sight.
Blocks
In Voxiom.io, each block has its own set of properties. Some blocks are more difficult to remove than others. Only the shovel can be used to harvest blocks. Ore blocks are unique in that they drop gems that can be used for crafting. When mining, the game's blocks physics system ensures that floating blocks are destroyed as well.
Map
Every game in the game is different and unpredictable. The toxic fog steadily shrinks the battlefield throughout the game. We add new random characteristics and structures to the map on a monthly basis.
Related Games