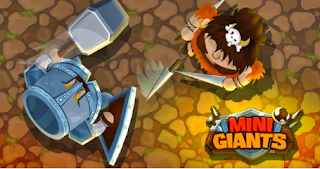 MiniGiants.io is a multiplayer deathmatch game played from the top down. Take command of your own MiniGiant and compete against other players for prizes. There are some classes from which to choose. You'll grow bigger, more powerful, and gain more loot as you level up, allowing you to strengthen your character! MiniGiants combines the highly popular development mechanics of games like Agma.io and Slither with traditional brawler games' classes and epic battles.

Control:
- To attack, use the left mouse button.
- To increase your speed, press the right mouse button.
How to grow fast: Collect the colorful bits around the map for energy to help your character develop quickly in MiniGiants. To level up quickly, defeat opponents in battle and play smart by avoiding giants. You become stronger and more unstoppable as you continue to dominate the game!
Chests: As you defeat opponents, you'll notice that they sometimes drop chests of varying rarities. Chests contain loot for your character as well as gold for item upgrades. Character items such as armor, rings, and helmets are available, and they buff your base stats and make you stronger. Keep an eye out for the rarest chests, which have the most valuable gear, so keep an eye out for them throughout the arena.
Classes: MiniGiants.io has a variety of courses, each with its own set of advantages. The default character is a Barbarian, who has a 50% increase in endurance. Other classes become available as you progress through the game. The following are the MiniGiants classes:
- Barbarian (level 0)
- Tank (level 3)
- Fairy (level 6)
- Amazon (level 9)
- Necromancer (level 12)
- Mage (level 15)
- Cleric (level 18)
- Beast (level 21)
Game Tips:
- At first, avoid larger players and instead concentrate on gathering bits.
- To level up quickly, fight as many enemies as possible.
- Gather chests from defeated opponents.
- Upgrade and swap out your gear with your loot.
Features:
- Characters with bonus stats that can be unlocked
- Multiplayer battles are a blast.
- Increase the stature of your player to absurd proportions.
- Get better gear and level up your character.
Related Games