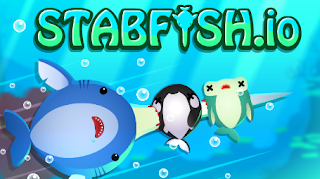 Stabfish.io is a free io game in which you take on the role of a vicious oceanic beast. Join a multiplayer arena of fish with deadly tusks and take down your share of prey while avoiding the stabber of another player. Collect fish like trophies, eat meals for extra energy, and rule the sea.

Control:
PC:
- To control the movement, move your mouse.
- To increase the speed, use the left mouse button.
Mobile:
- Swipe to change the direction of the game.
- To enhance, keep two fingers on the screen.
Playing Instructions
To receive boosts and a higher score, eat meals. By coming from the side and behind, you can exclude other fish. Your tusk becomes longer with each kill. You can be more daring with your attacks once your tusk is long enough. Your score will increase as you stab more fish. Each fish body will be used to adorn your skewer, serving as a reminder of your ferocious and deadly nature.
Customization
Fish
There are numerous fish improvements in Stabfish. More sea animals, such as killer whales and hammerhead sharks, can be unlocked by completing milestone milestones. These unlockable skins grant in-game benefits such as increased kill bonuses.
Weapons
Each player begins with a simple tusk. You can upgrade your tusk to a trident after you reach level 4 with it. Upgrades to a chill blade and chainsaw follow the same logic.
Features:
- Stabbing or being stabbed is an aggressive stab or be stabbed game.
- Bonuses at random to make you an edge
- To improve your score and boost meter, kill opponents and eat meals.
- To improve your fish and weapons arsenal, unlock achievements.
Related Games