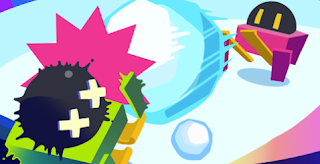 Snowball.io is an IO game where you shoot snowballs at other players in an online arena. You must collect snow and take down other players while avoiding the disappearing ice platforms in this epic snow war. The match is won by the last player standing!

Control: To switch and make a snowball, keep the left mouse button down, then release to fire.
How to play:
To collect snow, move about. If the snowball grows in size, it becomes easier to obliterate your arctic foes. Throw your snowball at other players when it's set. You will also use the snowball to hit players and knock them down. Simultaneously, you must stop being pushed off the brink by other players! Similar to battle royale games, you're competing on an ice base that melts as the stage progresses. You'll gain XP and unlock new skins as you complete fights.
Features:
- Gain XP and unlock new skins by leveling up.
- Participate in tournaments and compete in quick-play mode.
- Exciting, fast-paced gaming!
Related Games