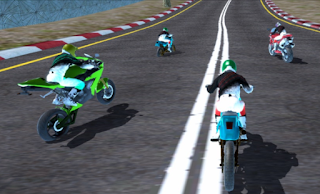 Fury Bike Rider is a 3D motorcycle racing game with three different game modes that allow players to compete, overcome obstacles, or simply enjoy the ride on one of the seven available super motorcycles.

Control: WADS/Arrowkeys to drive, N to nitro.  C to change camera, Space to Rear Brake
Modes of play:
Racing
The user will compete against up to five other AI racers in the racing mode. The target is to finish among the top three racers in order to progress to the next race. The higher the player's position, the more money he receives to upgrade his motorcycle. Aside from the final spot, there is extra money for reaching a certain time and collecting drift points during the race. There are a total of 24 races.
- At "Sky City," there will be 12 races.
- At "Rally Road," there are 12 races.
Challange
The player's objective in Challenge mode is to use his motorcycle to conquer all obstacles on the track. The next target is to deal with it in a short amount of time. Here, the player is ranked in terms of stars; the higher the rating, the more money available for motorbike upgrades. There are 24 challenging rides spread over two maps. "Up The Sea" has 12 rides, and "Deep Forest" has 12 rides.
Free Driving
When riding a motorcycle, the free driving mode helps you to relax. There is a huge city with mountains, plains, oceans, and ports, in other words, a lot to see and do! You can also collect up to 80 diamonds while riding the motorcycle there, which will allow you to unlock new motorcycles. However, in order to make it possible, you must be able to gather them in under three minutes.
Additional Features:
- 7 different motorcycles to ride
- Upgrades for increased top speed, acceleration, and handling
- Game difficulty is well-defined.
- 3 different environments in which to ride the bike
Related Games