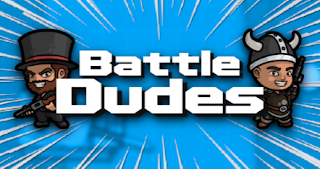 BattleDudes.io is a multiplayer 2D shooter game with a completely destructible map that is played in a top-down view. To aid you in your fight against the enemy, you have over 25 different weapons at your disposal, which you can unlock by playing the game and earning XP points. Everything you see in BattleDudes.io is destructible! If a wall is preventing you from capturing an enemy capture point, just shoot it down. This opens up hundreds of different approaches to the game and its goals. Vehicles like the jeep and the tank can be used to easily travel the map and transport your friends on bigger maps. Your friend in the passenger seat will shoot at enemies while driving the jeep! The single-seater tank is highly armored and equipped with a powerful turret that fires exploding rockets. Just keep an eye out for enemies wielding RPGs.

Controls:
- WASD to move
- Left mouse to shoot
- R to reload
- E to enter vehicles
- Mouse scroll or 1-4 number keys to switch weapons
- M or Tab to enlarge the map
- You can customize the controls in the Settings
Helpful Hints:
- Perks can be stacked, which means that if you have two of the same perk, the effect will be doubled.
- Ammo and health packs are droppable, so you can assist your pals by dropping them.
- Grenades deal little damage to motorcycles but a lot of damage to other players.
- Every object can be destroyed!
Related Games