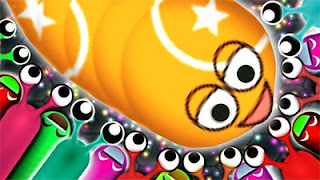 Wormate is an .io game inspired by popular multiplayer games like Slitherio. Set in a vast arena, you have to revolve around consuming food and increasing the power to grow your worm bigger. When you grow up, you will be able to trap other worms to destroy them and take their food! See how big you can get in Wormate. Become No. 1 with Poka Games!


Control: Move your mouse to control your worm and click it for acceleration.
Platforms: HTML5 for web browers.
Developer: This game is made by Oleksandr Godoba, a Ukrainian developer.
How to play Wormateio: Wormate is an online game simple enough for anyone to learn. You eat, you grow, and you exist. Watch out for other players, especially when you're older, as they will want to eat all the food you drop. The advantage of being big is that you can trap smaller worms by circling them.
Increased strength
Increasing power helps you reach worm-related targets in Wormate much faster. These capabilities affect you for a short time that you should make the most of the effect. The power in Wormate Online is:
Similar games
There are many games like Wormate Online. Most of these games are inspired by Slither and other early .io games:
Powerline io - Like the classic Snake, but in a multiplayer arena. Also, you are playing like an electric current, not a snake!
Worms.Zone - Like Wormate but with feel and other graphics for style lovers.
Paperio - Instead of raising snakes or worms, why not expand and develop your territory?
Frequently Asked Questions
Can I play Wormate with my friends?
There is a chance you might end up on the same server as your friends, but there's no way to organize the game just with friends.
How do i win on Wormate.io?
You reach the top of the leaderboard by becoming the biggest worm.
How to unlock the interface on Wormate.io?
Share Wormate on your social media platforms to unlock the new look.
Is Wormate.io the same as Slither.io?
Wormate is inspired by the awesome Slither.io.
Related Games