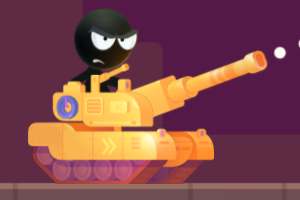 Stick Tank Wars is a banging n arcade game. You control a tank alongside your opponent during conflict. You can't target your attacker directly in an area where you have to be inventive in trying to beat them. You are in charge of the force and angles of your shot, aim to fire in the air and to hit your target from above above the barriers in front of you.


Control: To drag and release to shoot cannon, drag left mouse to aim.
Features:
— Computer-controlled unit fighting tanks
— Physics-based play where you must strike at the adversary
— Purchase new model tanks and types of ammo
— Various power-ups on the fighting field
Related Games