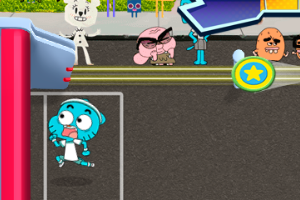 Gumball Disc Duel is a fun Cartoon Network game that enables you to play air hockey with the Amazing World of Gumballs characters. You may play with dual controllers versus AI opponents or your pals. The controls are straightforward — to protect your target, you may move your character to shoot. Each game has a time restriction and you have to score as many goals or more as you can as your opponent.

You are going to face different obstacles on specific stages - these impediments must be avoided and might make your character dazed or slowly move, so be careful! Try out and employ a range of shots to score objectives for your opponent. This game features beautiful visuals, exciting gameplaying, and all your cartoon network favorite characters. Can you become the champion of air hockey and overthrow your friends?