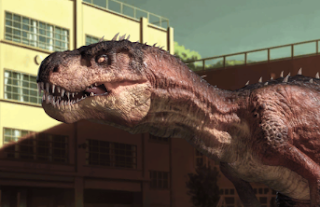 Rio Rex wreaks havoc in Brazil! This time you're free to roam the magnificent Rio de Janeiro, but remember the previous cities that were destroyed in New York and Paris.

It is not time to turn your focus to South America after conquering New York and Paris! Cross the ocean to wreak havoc and death in Rio de Janeiro. Once again, Tyrannosaurus Rex is a rampaging dinosaur who has no regard for human life; he only wants to chew humans, kill towns, and watch the earth burn!

This adventure game has everything. You must make your way through various towns and settlements, burning everything in sight and wreaking havoc. Each stage takes you to a different location in Brazil, and you must run through the towns with Rex.


Control:
—To switch the T-Rex, use the A,D keys or the left/right arrow keys.
—To run, use the W or up arrow.
—To chew, use the left mouse button.
—Hold the left mouse button down to shoot fire breath.
Features:
—Destruction game with a ferocious T-Rex
—The game takes place in various locations during Rio de Janeiro.
—There are 16 stages of play.
—The strength to fire a strong fire breath.
—Collect hidden skulls
Make use of Rex's terrifying fire breath pass!
Keep in mind that Rex will pick up a variety of items, including flammable drums and crates. Picking up one of these crates allows you to ruin cities and blast the horrifying fire to burn houses, homes, and cars alike. Since the fire breath only lasts for a little time, make the most of it!
Defeat various opponents armed with grenade launchers and chainsaws!
When you wreak havoc on the puney humans, you will come across some individuals who fight back! You must also remove these individuals so that they can not kill Rex. There's an armed guard with a grenade launcher, and a lumberjack pulling a big bulldozer!
This raging arcade game is yet another genius addition to the list, bringing to life various facets of Rio de Janeiro and Brazil. See how you can wreak havoc on this massive dinosaur today!
Related Games