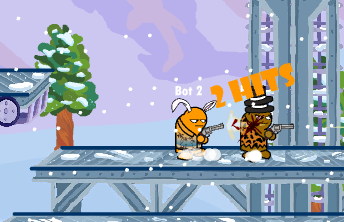 The sequel to Gun Mayhem has arrived! This time, there's even more noise. Destroy your formidable foes by firing them or blasting them off the ground with dynamite. There is a single player campaign mode, custom games, and a series of challenges in this title. If you've chosen a game mode, you can change your character's look, colour, and loadout – you can change their shirt, cap, and face, as well as their perks and firearm.

The goal of each round is simple: knock your opponents off the stage to keep them from jumping back on. Shooting your opponents allows you to drive them around. Using a sequence of hops and double jumps, you will avoid being knocked off the stage. The gameplay is fast-paced and enjoyable, and quick reactions are needed to win! There are a variety of guns to pick from, including a handgun, machine gun, and SMG, as well as TNT and grenades! Will you be able to win Gun Mayhem 2?


Control:
—Use the arrow keys on the keyboard to move
—Up/Down to move up and down platforms
—Z to fire
—X to throw TNT
Features:
—A variety of weapons and gadgets to choose from
—Customizable characters
—Single player and split screen multiplayer modes
Related Games