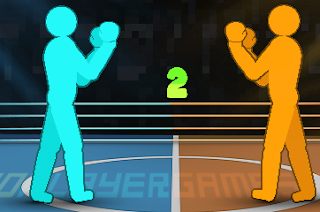 With the new game, the Drunken wars resume. Drunken Boxing involves Drunken Boxers entering a stadium and attempting to knock each other unconscious. In the game, you can throw fast punches, but keep an eye on your Energy Bar! It will take some time to heal if you run out of steam. You would undoubtedly be weak in this case. So, when deciding on a combat tactic, don't forget to factor in your energy!

There are 1P and 2P modes in the Drunken Boxing series. The game is playable on both PC and handheld devices. The match is won by the first player to achieve a score of 5 in the game!


Control:
- Player 1: Use the arrow keys.
- WASD keys for Player 2
- On touch screens, you can use both the left and right sides.
Related Games