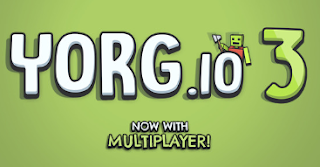 YORG.io 3 is a one-of-a-kind blend of tower defense, zombies, and tactics. Over the original YORG.io, which was played by over 2 million users, it adds completely new material!

You must build your base and defend it from zombies that attempt to kill it during the night. Mines and warehouses must be placed in order to create supply chains that provide ammo for the defensive towers. Research and update each tower to unlock its unique ability, and control the factories to deliver the most capital at the fastest time!


Control: To select actions, use the left mouse button.
Yorg.io 3 is the follow-up to YORG.io. To escape the zombie attacks, you must create a foundation and handle every element. This game is all about tower defense, foundation construction, and supply chain management! If you like it, you can also try Shapez.io, another gradual game by Tobias Springer.
YORG.io 3 adds completely new material, including a slew of new buildings and enemies. Unlock towers gradually, such as the new laser tower, and ready for armed and invisible monsters, super hard bosses, map themes, and much more! In addition, YORG.io 3 now has multiplayer! Play with your mates and compete in ranking games to move up the ranks!
Related Games